The Joke’s on Jobbik

Posted by dianamuir on June 12, 2012
Uncategorized

In case anyone doubted the fundamentally racist nature of the Hungarian  Jobbik  Party, a Jobbik Member of Parliament demonstrated his ignorance  by getting  a genetic testing company to screen his DNA and certify that he does not have Jewish or Roma (Gypsy) ancestry.

There are, of course, no genetic markers that will infallibly distinguish Roma or Jewish ancestry; they, like all peoples, are  diverse.

The one,  minor point that I wish to make here is that while there is no such thing as a “pure” race of people (members of all human groups marry in and out)   the Hungarian Magyars are more motley than  most.    Examined by geneticists curious about what light DNA markers can throw on human history, modern Hungarian speakers are found to be descended from a wide range of  West Eurasian  peoples: there are no racially pure Magyars.

For the curious, here’s what a certificate of no-Jewish and no-Roma ancestry looks like: 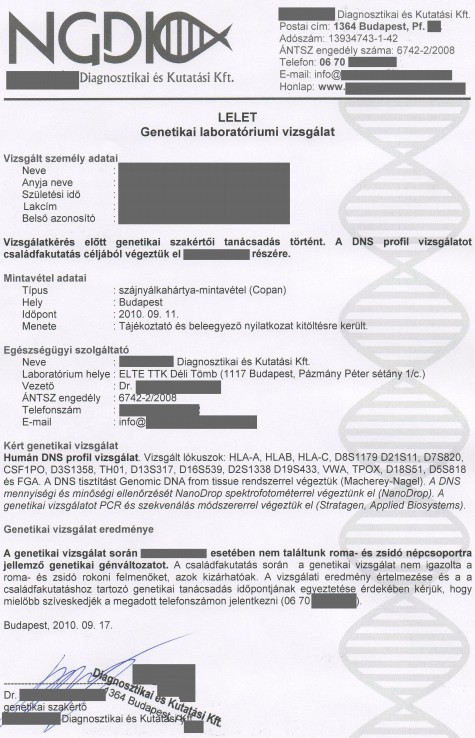 The key words are “Roma es Zsido” in the last paragraph.   For the record, lots of people are curious about who their ancestors were for innocent reasons; but there is nothing innocent about the racism of Jobbik.

Some recent papers on the historical genetics of the Magyars can be found here, here, and here.