The unbuilt synagogues of the Great Depression 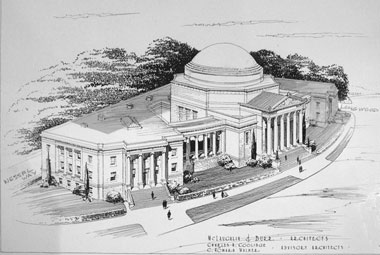 In the irrational exuberance of 1928, everything seemed possible. Boards of directors could plan enormous synagogues in glistening white stone to rival the Parthenon. Academic dreamers could design a great Jewish university with towers, courtyards, and gardens to challenge the magnificence of Princeton or Oxford. No ambition was too large, no plan too expensive. One had only to hire an architect, draw an elegant façade, and watch the building fund fill. Then, in October, 1929, the great building boom ended with a crash, leaving magnificent synagogues on architects’ drawing boards, forever unbuilt. It all feels very 2008. What follows is a glimpse at some of the more ambitious plans and what, ultimately, became of them.

Boston’s Temple Israel had been more or less forced to join the great building boom of the 1920s. After all, Kehillat Israel had completed its new Harvard Street building in 1925, the same year that Mishkan Tefillah finished construction on a gleaming white temple made of Indiana limestone for a congregation with the ambition to be the European-style Great Central Synagogue of Boston. (The would-be Great Synagogue, beautifully restored, is now a flourishing Pentecostal church.) And in 1928, Boston’s oldest congregation, Ohabai Shalom, finished work on an elaborate, copper-domed, Beacon Street edifice.

Clearly, Temple Israel had to replace its 1906 building with something new. Something tasteful, American, and absolutely guaranteed to outshine every other temple in town. Something like a classical temple made of the purest white limestone with two grand wings, an enormous dome, and a façade adorned with no fewer than 26 tall columns. The design for Temple Israel echoes Jefferson’s design for the main building of the University of Virginia. Indeed, had Mr. Jefferson been invited to design a Great American Temple, it may well have looked like the plans for Temple Israel.

In the architect’s drawing, the four-columned meetinghouse and school building, in use since 1927, are shaded grey. None of the other 22 columns in the plan were ever erected, nor were the buildings that would have risen behind them. In the 1960s, Temple Israel built a spacious, modern sanctuary beside the classical Meeting House of the 1927 plan.

The most ambitions Jewish plan of the Roaring Twenties was the main campus of the Yeshiva College, the first building of which was dedicated in January 1929. The new campus was located in the heart of middle-class, Jewish New York, at the eastern edge the Washington Heights neighborhood.

A standard style for American universities was collegiate Gothic, intended to confer the prestige of Oxford and Cambridge on New World campuses. Other schools were built in a Classical style, to capture the reflected glory of Greek and Roman learning. The Medical College of Virginia chose Egyptian style on the grounds that the world’s oldest medical knowledge was Egyptian. The trustees of Columbia University voted to design their prestigious new campus (which the trustees of Yeshiva College could almost see from Washington Heights, if they looked over their left shoulders) in Renaissance style, both to capture the glory of northern Italian scholarship and to trump the University of Chicago’s brand-new Gothic campus.

Jewish scholarship was not only older than Oxford, Cambridge, and Columbia put together, it was older than the Renaissance, older even than Rome or Athens. What Yeshiva University needed was a campus in an ancient Jewish architectural style. Architect Henry Beaumont Herts provided one, carefully explaining to The New York Times that his campus was designed in an authentic Jewish style covering several centuries BCE.

The campus that emerged from Herts’s drawing-board was an exotic world of courtyards, arches, towers, and domes calculated to put Columbia, Princeton, and Yale to shame and satisfy the most romantic soul ever to dream of life in the Ivory Tower. This particular rendition of the ivied campus dream was the Arabian Nights. The domes were Ottoman, the arches Moorish, and all the towers were minarets.

Then, with only the first building of the expansive plan actually built (complete with colorful Moorish tile work and minarets), 1929 happened. When prosperity returned, instead of gardens, arcaded courtyards and domes, the modern university built Belfer Tower, the monolith that looms to the north as you drive east on the Cross-Bronx Expressway. To the administration’s horror, students have used every building on campus as a rappelling course, even towering Belfer and the old minaret.

Chicago’s Temple Mizpah dreamed oriental dreams of a different style, planning a large, domed, Byzantine synagogue—the most fashionable choice for American synagogues in the 1920s. Alas, only the Hebrew School wing was ever built. The congregation later merged with Temple Judea of Skokie.

Detroit’s Congregation Shaarey Zedek got the Byzantine revival building it wanted, only smaller—much, much smaller. The congregation originally asked Albert Kahn—“the man who built Detroit”—for a $750,000 campus, complete with gymnasium, library, school building, offices, chapel, auditorium, a banquet hall seating 1,200, a small sanctuary seating 500, and a main sanctuary to seat 2,500. It had to settle for a handsome $300,000 Byzantine building with no frills and no gymnasium. However, in 1962 architect Percival Goodman would pull out all the stops for the congregation’s futurist synagogue in suburban Southfield.

Congregation Anshe Emet’s 1929 plan for a new Chicago synagogue was bold, a cutting-edge design with the strong vertical lines of the Art Deco/Art Moderne movement, topped by a wonderful pair of lions. The congregation settled for a renovation that added davening space to the old Hebrew School building, and later moved to Lakeview.

Left: Anshe Emet’s unbuilt plan for an Art Deco synagogue beside the Hebrew School that it already owned. Right: The modest Art Deco renovation of the Hebrew School façade that was actually carried out. CREDIT: Robb Packer, author of Doors of Redemption

Yet the best snapshot of the lost dreams of the 1920s may be the magnificent unbuilt sanctuary of Brooklyn’s Union Temple. It was to have been a classical temple, relying for grandeur on the sheer scale of its columned entrance and vaulted sanctuary. The eight-story Hebrew School wing was finished before the crash, and the congregation settled for renovating the auditorium into a worship space.

When the economy crashes, we adjust.

Diana Muir Appelbaum, who has written for a number of Jewish publications, is working on a book about nationalism.