Posted by dianamuir on May 29, 2012
Architecture of Identity, Uncategorized / 1 Comment

This is a great looking building.  A head-turner. It was meant to be.   It was built by  Circassians, the original settlers of Amman Jordan.

The Circassians arrived in 1878 as refugees from the Russian conquest of their homeland.  The site where they settled, now the city of Amman, was empty, a landscape of goats grazing among the abandoned ruins of vanished empires.

This mosque was built in 1961 as an identity statement by the small but wealthy and powerful Circassian community.  The  black and white patterning of the stonework evoke several of the great mosques built in Cairo by the Circassian Mamluk rulers of Egypt, like the one below, built by  Sultan al-Muayyad Shaykh in the early fifteenth century.   The allusion was apt, since the Circassians of Jordan have been a key part of the officer corps of the the Jordanian army and the  administration of the Hashemite dynasty that rules Jordan, and largely excludes the Palestinian majority from the government. 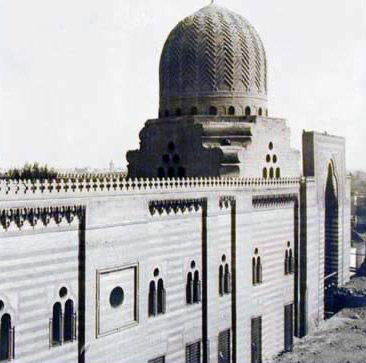 Here is Johann Ludwig Burckhardt’s description of the site of modern Amman as it appeared in 1812,  from his book “Travels in Syria and the Holy Land”:

“We entered a broad valley, which brought us in half an hour to the ruins of Amman, which lies about nineteen English miles to Salt. The town lies along the banks of a river called Moiet Amman, which has its source in a pond, at a few hundred paces from the south-western end of the town; the river of Amman runs in a valley bordered on both sides by barren hills of flint, which advance on the south side close to the edge of the stream.”

“The edifices which still remain to attest the former splendour of Amman are the following: a spacious church, built with large stones, and having a steeple of the shape of those which I saw in several ruined towns in the Houran. A high arched bridge over the river; this appears to have been the only bridge in the town, although the river is not fordable in the winter. The banks of the river, as well as its bed, are paved, but the pavement has been in most places carried away by the violence of the winter torrent. The stream is full of small fish. On the south side of the river is a fine theatre, the largest that I have seen in Syria. On both wings of the theatre are vaults. In front was a colonnade, of which eight Corinthian columns yet remain.”

“Nearly opposite the theatre, to the northward of the river, are the remains of a temple, the posterior wall of which only remains, having an entablature, and several niches highly adorned with sculpture. Before this building stand the shafts of several columns three feet in diameter. Its date appears to be anterior to that of all the other buildings of Amman, and its style of architecture is much superior. At some distance farther down the Wady, stand a few small columns, probably the remains of a temple. The plain between the river and the northern hills is covered with ruins of private buildings, extending from the church down to the columns; but nothing of them remains, except the foundations and some of the door posts.”

“On the top of the highest of the northern hills stands the castle of Amman, a very extensive building; it was an oblong square, filled with buildings. The castle walls are thick, and denote a remote antiquity: large blocks of stone are piled up without cement, and still hold together as well as if they had been recently placed. Within the castle are several deep cisterns and a square building, in complete preservation, constructed in the same manner as the castle wall; it is without ornaments, and the only opening into it is a low door, over which was an inscription now defaced. Near this building are the traces of a large temple; several of its broken columns are lying on the ground; they are the largest I saw at Amman, some of them being three feet and a half in diameter; their capitals are of the Corinthian order.”

Here is a photograph of Amman taken in 1918 by  Col. D.G. Croll who donated his wartime photographs to the Australian War Memorial.