İğneli Fıçı, is an anti-Semitic Turkish book published in 1958 featuring a  Jew who kidnaps Muslim children and extracts their blood for use in baking matza with an İğneli Fıçı, a “pin barrel” or “needled barrel”,  a barrel studded on the inside with sharp spikes.

This vicious blood libel was invented by one Cevat Rıfat Atilhan, long one of Turkey’s leading anti-Semites.   It is apparently still in print.

Özen Karaca published a clear-eyed doctoral dissertation on Atilhan, The Theme of Jewish Conspiracy in Turkish Nationalism: The Case of Cevat Rıfat Atilhan in 2008.  It is available online.

Karaka is a useful source on Turkish antisemitism, a topic not easily accessible to those of us who do not know Turkish.  I take the liberty of reprinting most of the brief section on Passover and Blood Libel:

“Atilhan asserts that for the Jewish festival, Passover, unleavened bread
is cooked from the blood of Muslim and Christian children through a pin barrel;
this is a Jewish tradition for the satisfaction of greed and grudge towards the non-
Jews (Atilhan, 1958: 7). In the foreword of Igneli Fıçı, Atilhan discusses the
authenticity of the killing stories:

“‘Some say that these stories are inventions, false accusations or merely myths; yet, can there
be any smoke without fire?‘ (Atilhan, 1958: 5).

“This shows that Atilhan thinks the sharp reaction of the Jews is related to the fact
that they performed such cruel killings. The killing stories display in his view “the
horrible conspiracy by the Jews aimed at destroying Islam and Christianity”
(Atilhan, 1958: 117). His emphasis that such atrocity cannot be carried out by
90
human beings has a provocative character which not only has a mobilizing but
also a justifying effect to attack the Jews. In this way, very similar to fascist
discourse, violence against the Jews becomes legitimate.”

The phrase İğneli Fıçı appears to have become something of a trope among Turkish anti-Semites, a shorthand for vicious anti-Semitic slanders. 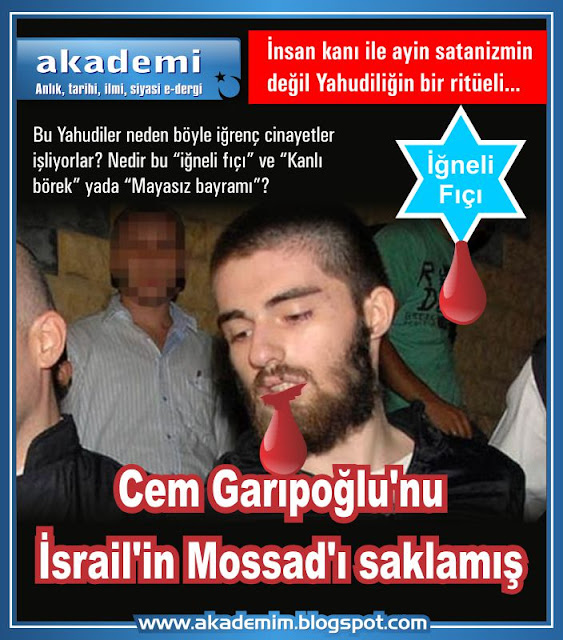 A Turkish website posts an image dripping bloody anti-Antisemitism, in an accusation about the tragic the murder of Münevver Khan, a pretty, Istanbul 17-year-old  brutally murdered in 2009.  The accusation here is that she was killed in a “pin- barrel” and that the murderer escaped on a flight to Tel Aviv arranged by the Mossad.

Here’s the jacket of another  Atilhan title:

To the credit of the Turkish reading public, this Atilhan title is  apparently out of print.