Tinghir-Jerusalem, Echoes from the Mellah: The Rediscovery of a Judeo-Berber Culture

A French-born, Muslim Berber filmmaker helps us understand why Morroco was the world’s most complex Jewish community, and perhaps the most paradigmatic.

How old is the community?  We don’t really know, although a Moroccan  archaeological museum preserves an oil lamb impressed with a menorah discovered in the Roman city of Volubilis.    The Jews may have stayed after the Romans left, living among   the Berber people who lived in Morocco before and after the Romans, speaking  languages whose Berber descendent tongues are still spoken in the mountains of southern Morocco.

Kamal Hachkar, the young French high school teacher who brought his first film to the New York Sephardic Film Festival this spring, grew up speaking Arabic, French and Berber, especially on visits to his grandparents in Tinghir, a Berber oasis city east of the Atlas Mountains.   As a young adult, he was surprised to learn that his grandparent’s Berber Muslim town once had a substantial Jewish community. 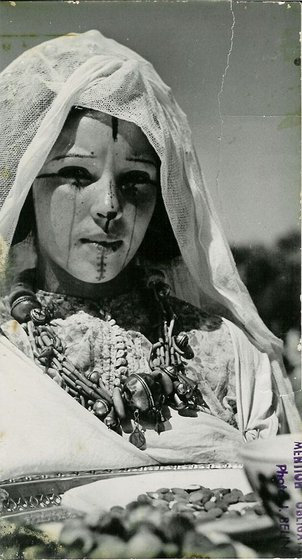 His film, Tinghir-Jerusalem, Echoes from the Mellah: The Rediscovery of a Judeo-Berber Culture shows Hachkar walking through Tinghir with his grandfather, they pause and Hachkar asks if this is where the synagogue was.  Of course, the grandfather responds, but there is only a pile of rubble where the adobe building once stood, vacant lots in the old Jewish quarters of this and other towns, and erstwhile Jewish stores in the plaza, now owned by Muslims.

Hachker learned what the children of Muslim immigrants in French apparently learn if they ask about the vanished Jews, that the Jews did not want to leave their Moroccan villages, that they were forced to leave by something called the Jewish Agency, that they left with tears.

He follows the story to Israel.  Learns Hebrew.  Tracks down the elderly Jews who left Tanghris,  and the tears flow.   They were torn from the homes of their childhood, from their friends, their language, they sing the old Berber songs and reminisce.   The refugees from Tinghris have not had easy lives in Israel.  But do they regret leaving?

No, and not merely because, as one Israeli-born daughter reminds her mother, in Morocco, she had to do the laundry by hand in the river.   The Jews left because they had to leave.   There was no longer a place for them in Moroccan society.

A few thousand Jews remain in Morocco, mostly in the business hub of Casablanca, but by the 1950’s Morocco was unwilling to tolerate a community of significant size.

Only a small percentage of Morocco’s Jews were Berber-speakers.   In a telling scene, the filmmaker meanders through the ruins of the abandoned Jewish quarter of a small, Berber town, as an elderly man tells him about the close friendships between the Jews and Muslims, tells him how,  during the endless tribal wars that continued into the twentieth century, Jewish members of the tribe would take up arms and fight alongside Muslims to defend their territory.   But when asked if it were possible for a Jewish and Muslim boy and girl to fall in love and marry, the old man  recoils in shock.  Such a marriage was simply unthinkable.

You can see traces of Berber influence today in the geometric, humanoid carvings of the gravestones in the old Jewish cemetery of Mogador, modern Essaouria.  Berber Jews have long intrigued French ethnologists, who photographed the Jewish Berber women with their distinctive tribal jewelry, embroidered robes and tattooed faces. 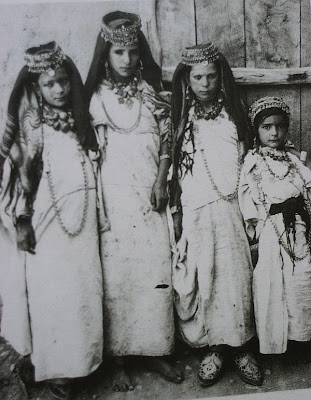 Larger Jewish communities lived in Fes, and Marrakech and other cities,  speaking Jewish versions of the distinctive Arabic dialects of the regions in which they lived.   After 1492 they were joined by a large community of Jews expelled from Spain. The two communities maintained their distinctive identities; Sephardim spoke Ladino and attended Sephardi synagogues.

It is easy to get nostalgic about Jewish life in Morocco.   The picturesque towns, the wonderful food and, more substantively, the fact that Jews have citizenship, Jewish tourists are welcome and the government has a moderate attitude towards Israel.

But this year is the centennial of the Fez Pogrom of 1912, a useful reminder that the history of the Jews of Morocco was very like the history of Jews in other Christian and Muslim countries.   Most of the time, Jewish life in Morocco was peaceful, with the understanding that the status of Jews was inferior and that they lived at the sufferance of Muslims.  Sometimes there was violence.

In Morocco as in other Muslim lands,  while it was unthinkable for a Muslim girl to marry a Jewish boy, the taking of Jewish girls as secondary wives by powerful Muslim men was a recurring problem.  There was no recourse; nothing the family could do.   Once a girl was taken and converted to Islam, she could not be returned to her family or her community.  A memorial in the old Jewish cemetery at Fez marks the grave of a girl who died in such an incident.   The cemetery is enormous, but this grave stands but because of the number of candles that continue to be lit in her memory by Jews who remember, perhaps not this individual girl, but the pain of that particular, recurring grief.

The cemetery is adjacent to the mellah, the Jewish quarter, which, like the ghettos of Christian cities, defined a separate and inferior Jewish space.  It is not that Jews could not rise to great wealth and even power in Moroccan society, they could and did.  But, ultimately, they had no rights, only such privileges as the Muslim society and sultans chose to grant them.   For centuries, they put up with what their neighbors dished out: the petty humiliations, heavy taxation, and occasional violence.  Or they moved to a city where the prince offered better terms.

The birth of the Jewish state offered Jews an opportunity to leave the lands where they lived on sufferance, and the Jews of Tinghir seized the chance to move to a land of their own.

See also “The Last Berber Jews”  on Jewish Ideas Daily and in the Jerusalem Post.