Biggest house in the village – when immigrants make good

Posted by dianamuir on November 08, 2012
Immigrants, Uncategorized / Comments Off on Biggest house in the village – when immigrants make good

The dream of many, perhaps most, immigrants to the United States and other wealthy countries has long been to get rich, return home and build the biggest house in the village.

Tahar ben Jalloun’s novel “A Palace in the Old Village” is a poignant reflection on the pain of immigration shown in the story of an immigrant who returned home to the old village and built a palace, only to discover that his children and grandchildren would not join him in it; they preferred to stay in France.

Here are some of the  houses built by immigrants who made it, and showed it off by building the biggest house in the old village.

This  house was under construction in July 2012 in Betar/Batir, a farming  village  on the ancient road from Jerusalem to the coast.  It is being built by a Palestinian Arab who earned the funds ot build it as an immigrant to the Unites States.  It is part of a dramatic building boom  in Israel and the Palestinian-controlled territories, a kind of competition among emigres who have built comfortable lives in the West,  “And every one of them wants to build a house that’s better than the next,” back in the old village.

The Chinese, of course, do things like this on a grand scale. 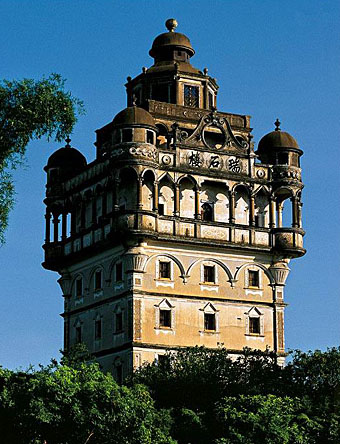 This house, known as the Ruishi Lou  was built in 1923  by a villager named Huang Bixiu whom made good in Hong Kong.  It is 28 meters tall and yet it is less astonishing than the fact that it is embedded in a landscape of similar houses  that sprawls across Guangdong Province in south China.

Hundreds of these tower houses were  built to show off the wealth of sons of the village who had immigrated not only to Hong Kong, but to North and South America and made good.   Some are part of a UNESCO World Heritage Site, some are inhabited by distant relatives of the builders, some have crumbled into ruins.  It is not clear that any became the permanent homes of the children and grandchildren of the emigrants who built them.  The descendants of those men and women appear to be living in the far away countries where the money was made.

Jaripo is a village in the Mexican state of  Michoacan.   The youth of Jaripo began heading north to work in the fields of California, by the 1960’s the river had become a flood, and by the 1980’s they were bring home enough money on their annual visits to renovate and paint the modest adobe houses they had grown up in.  The story of the town and its emigrants is told in Sam Quinones book Antonio’s Gun and Delfino’s Dream.    But also in this  Youtube love song to the village, showing the beautifully renovated church, plaza and houses paid for by children who grew up and moved away.

The building boom is over now, fewer emigrants return for Christmas, and only a handful returned to live out their retirement years in the houses they renovated, proving that it is easier to dream of going home, than it is to leave your American children and grandchildren and go back to the old country.

Two granddaughters of Jaripo, home for the holidays.

The Philippines sends  huge numbers of workers around the globe  as  guest workers or immigrants.    Mabini Batangas is known locally as “Little Italy” because  “Large stone houses — often with brand-new vehicles in their driveways — cover the district, even though the narrow streets can barely accommodate more than one car at a time.”  They are paid for with money earned working in Italy.